Some thing that did not happen… 🙂

There is the handwriting analyst, Preets, who is quitting this week to pursue her studies abroad. Good for her! We had some fun times, although we have not had too much of an opportunity to interact, she is fun to be with. A going away bash was organized after which they crashed at our place. We went to a pub and then danced to insane glory. Saw some insane people dancing, or something that included moving(the real terms would qualify for adult content) themselves. For those who had a drink, they had a high after two minutes with the beer, and for us teetotalers, it was a high just from watch people do weird stuff. After blowing away couple of minutes of my life in smoke, we decided to head home.( Do I see Ismiley Scheming?)

At home we, well the rest of them ended up playing ‘bluff’ and the game went on and on. Seeing absolutely no hopes for ending, Sjpaul, slept very comfortably on my lap.(There are pictures of the baby sleeping, but it may cause my instant death if published!) Maybe the head massage I gave worked or something, he slept for some time and I thought I might have to chop my leg off as it felt more like a log. After the game got over, Preets and Lakshmi indulged in some pillow fight. Mukhi(a colleague, I do not know too much except for the fact he is passionate about alcohol and Pune), Sjpaul (you know him!), and Ram(li’l disnie’s friend, someone who is passionate about photography, happens to be working in the same company as I do! Really don’t know if I manage to see through people) were around and I think it must be 50% of their teenage fantasy come true – Peace! This was when I had just placed myself comfortably on the bed… nested my head comfortably on the pillows and waiting to fall asleep amidst random, incessant banter at 330 AM. But that was not meant to be. The girls, Preets, Lakshmi and Li’l Disnie, had the idea of having ice cream. And, therefore, we set out in the dark of the night.

The city illuminated by sodium vapor lamps, we set out to Durgam cheruvu. A car, Sjpaul’s, and a bike, Ram’s. For data points, Sjpaul’s car is a Maruti 800, a ’99 model; it could with a little service, and a lot of cleaning. John would not part with this 1200cc baby because of it holds a special place in his life/heart, neither would he, despite several requests, describe his feelings for her. Ram’s bike is a Kawasaki caliber, he describes his baby as unshakeable(could not get more words from him either, no wonder they say, men are bad with words, gone are the days of Shakepseare!). Mukhi’s scooter, which was the original option to travel, is a Kinetic Honda. However, I think the Caliber was what made so much of a difference to the night 🙂 The only condition that I got out of the comfort of the bed, was that I get to take a ride on a bike! (the only other way I would have had some fun was driving, but I do not drive anyone else’s car, unless testing it! 😦 )

A Maruti 800, a Kawasaki Caliber, and seven of us. While the rest of them went along in the car, Ram and I went on his bike. Sjpaul’s driving skills have been discussed on private blog posts, but for the rest of the junta, he tends to be sleepy, and will loose direction, well as long as I have traveled with him, he did. And seeing a tall guy like Mukhi squeeze into the back seat of an 800, and the fact Sjpaul was going to be handling the three women was more than rewarding : ).

The ride on the bike was truly great – it made my 8 months in Hyderabad worthwhile. I have ranted about the city, the roads, the traffic and all that can be ranted about. Traveling on good roads, with little or no traffic, and no pollution was a joyride. If in Chennai, I would relate it to driving up and down on an empty Mount Road. No matter what you try to be, you just have to be born with it. I feel that way about many things, (class, IQ, culture, attitude and personality) and the same applies to bikers/drivers. I am not a born bike enthusiast, but I appreciate a good ride. According to me, IMHO, you are a good rider, if I have traveled with you, and I have not jumped off the bike even once or not spoken about it thereafter. In the category of born bikers, there is Sabari ( he has a hero Honda Splendor, and now I would, may be include Ram (not Vikram, not Dhiraj, not Vinay and they know I would not be writing about their biking skills.). It is amazing that these two do not have the “in-vogue” bikes!(maybe they are muted specimens from the male species – with brains 😛 ) It is a true pleasure to take a ride with people who appreciate the machine and enjoy it, rather than just showing off the metal. And the highlight of yesterday’s, tech specs and the speed factor aside, was a moment when the horizon was a frosted orange, with little specs of lighting that shone to guide us through; a moment when the mist had a warm and welcoming glow though the wind was chilly and biting.(Could have sat there till dawn and written a poem or captured it through a lens or just painted it!!)

Durgamcheruvu is a water body in the middle of hitec. And the corporation has taken pains to build a nice lawn and all that around it. If you can manage mosquitoes and a breeze bringing with it some stench, and the incessant arrivals and departures of cabs, I would recommend you take a ride down. It was constructed during the Qutub Shahi era and was given a facelift sometime around 2003. Apparently, it is also a good place for angling. (I have absolutely noclue why it is also known as the secret lake!) 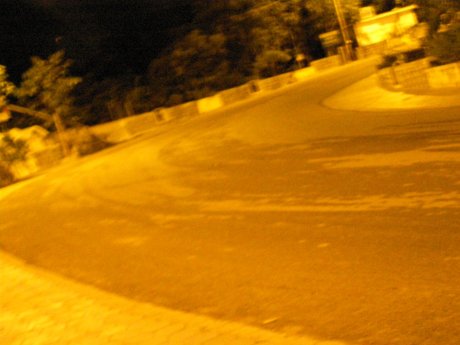 A native of Hyderabad, Ram, acted as guide to show the homes and offices of the who’s who in the city while we rode slow as the car was nowhere to be seen. The car came, even more slowly, as Lakshmi was driving it. Practicing it rather. Though it was short lived, Li’l Disnie woke up from sweet slumber and got a little paranoid about not seeing Sjpaul in the drivers seat. On our way to early morning chai, we took another nice road, only we did not realize that there were those monster speed breakers! Engrossed in a conversation, and enjoying the ride (I dare to assume at this point), neither of us noticed these and went flying into the air.. airborne for 3 seconds and landing back on the road to be welcomed by another monster speed breaker! But the rider was careful enough to keep us earth bound! And we lost track of their car again. We eventually reached the chai shop, sipping tea, I wanted to see sunrise at necklace road. But we could not make it! People were sleepy and tired of riding and driving. Nevertheless, I did see the changing tones of the blue sky at dawn, and stayed up a little more to watch the reflection of sunrise on the windows of the huge building opposite my house, which unfortunately does not allow us to watch sunset! The night has gone, the darkness eroded, the cold has waned, and the temperature had soared to an exhausting degree. Every one has gone home and are by now in Dreams Ville. And I sit to write about my longing to ride along an empty necklace road and watch sunrise. Maybe when Sabari comes or if Ram is sympathetic enough, I may manage to do it. BTW, it was the first sunrise (even if it was just a reflection!) I witnessed after moving to Hyderabad. 🙂 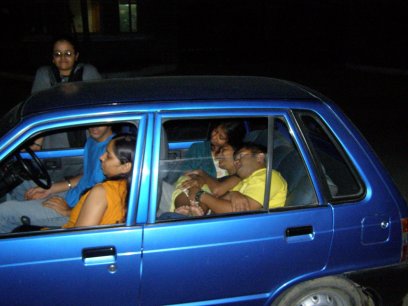 Johnny’s Baby with the wasted lot of them  🙂

Thanks to Ram for the photographs.

11 thoughts on “Sunrise at Necklace road!”