Dangal is a movie about the Phogat sisters who won India the gold medals in wrestling. Amir Khan plays Mahavir Singh Phogat, a wrestler. The movie shows Phogat as a national level player who gives up his sport to pursue employment. A family man now, with dreams and hopes of his son winning India a gold medal in wrestling. Unfortunately for Phogat, he is blessed with four daughters. He then gives up hopes of ever training a son to become a wrestler. 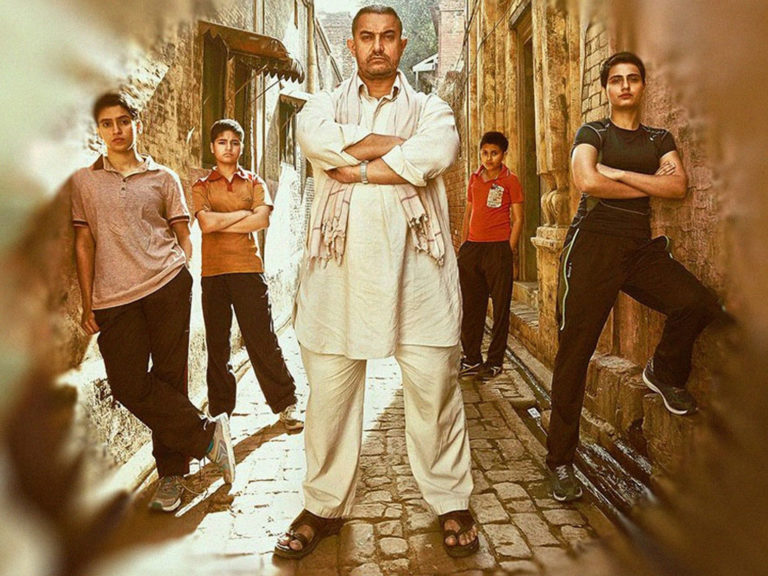 Phogat is pleasantly surprised one day when his two older daughters, Geetha and Babita beat up two boys for teasing them, and show him how they managed to overpower the boys. He then realises that to win a gold medal for his country he can train his daughters just as well as he would his son. The rest of the movie is their journey from that moment of realisation to Geetha winning the gold at the Commonwealth games.

What I loved about the movie – the two girls who played Geetha’s and Babitha’s younger selves, Zaira Wasim and Suhani Bhatnagar. They easily slip into their roles and win our hearts. Sakshi Tanwar, who plays Phogat’s wife Daya Shobha Kaur, is superb. She plays the role of a wife sharing her husband’s dreams and disappointments, the role of a mother who worries for her daughters’ futures effortlessly. The worry, the pride, the disappointment, the happiness, and the many emotions that flit through her face are joyous to watch. Another actor to be commended is Aparshakti Khurrana, for his effortlessly natural acting.

As usual Amir Khan shows us how much of a dedicated actor he is. From playing a 97kg middle-aged Phogat to a younger, trimmer and well-built version of the wrestler. His acting really needs nothing to be discussed about because he proves it time and again in every film of his.

The only disappointment with Dangal that I have is the end. I can understand that Hindi cinema is not complete without drama, but Dangal could have gone without it. The music was good, it fit the plot and did not take anything away from the movie, whilst not being intrusive as well.

Overall I would say it was a good movie – Go watch it if you haven’t already.

As an aside, I don’t think it’s possible to go down from 97 kgs to getting a six pack in five months. (Watch it here). So, unless you have Amir Khan’s level of dedication and trainers/dieticians to match, leave it. Stick to your routine and you will get there eventually. Besides, there is only one Amir Khan.