I’ll just start off by saying I am not too impressed with this book. It’s just that I’ve been reading many mysteries and thrillers recently that this one seemed too mundane in comparison. Or maybe it was because Blue Baby was a part of a series, Brandon Fisher FBI, and I read it as a standalone. Either way, it gets a three-star review only.

The premise is promising. The FBI is notified when there happens to be a murder. A young woman is found dead in her bathtub. She is found dead wearing a bridal gown, jewellery and veil. Her face is beautified with tasteful makeup and she seems to be at peace. Only her ring finger is cut off and found lying o her lap. This is the second such Murder in the town, the first one happened on the same day a year back. 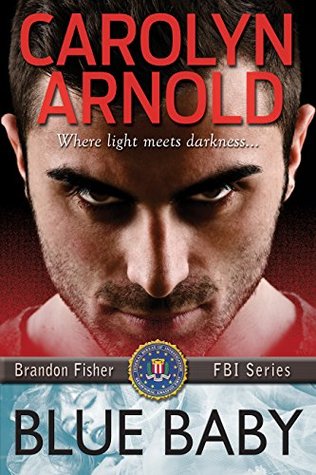 The FBI team consists of Brandon, Zach, Paige and their boss Jack. Brandon is commitment phobic and his affair with Paige in the past still colours their interactions. Jack keeps business and personal domains separate. Zach is the genius of the group. Then there is Nadia, their computer genius working form the office. If Jack, Zach and Nadia remind you of certain characters from Criminal Minds, then I am glad I am not alone. As the team investigates the murder with the help of the local police, another murder takes place. Just within three days if the second one. The team is now in a rush to find the murderer.

While I liked the entire serial killer hunt part of the book, the interplay of flirting/affairs and the emotional drama seemed a bit too much for me. These were people investigating the crime and what was thought to be a murder mystery was more one guy’s monologue on his commitment phobia, including his marriage, divorce, affairs and subsequent relationships. There was too much Brandon and this took away the thrill of the book. And that was disappointing. It could have been a better read.

These are few other thrillers I have enjoyed reading. You can read the reviews by clicking on the links.

In The Name of God by Ravi Subramanian

The Girl Who Lived by Christopher Greyson

My rating: 3 of 5 stars
View all my reviews